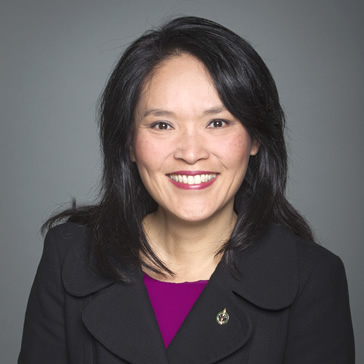 For over 28 years Jenny Kwan has fought for the people of East Vancouver. In 2015 she was elected as the Member of Parliament for our community.

Born in Hong Kong, Jenny immigrated to Canada at age nine. After graduating from Simon Fraser University, she worked as a community legal advocate in the Downtown Eastside. In 1993, she became the youngest city councillor elected in Vancouver’s history, distinguishing herself as a fearless voice for the community.

In 1996, she was elected MLA for Vancouver-Mount Pleasant, becoming one of the first Chinese-Canadians to sit in the Legislative Assembly. Jenny was also the first Chinese Canadians appointed to cabinet and served as Minister of Municipal Affairs, Minister of Women’s Equality and Minister of Community Development, Cooperatives & Volunteers.

Jenny was the BC government’s lead in developing the Vancouver Agreement, a ground-breaking initiative promoting health, safety and well-being in the Downtown Eastside. Re-elected as an MLA in 2001, 2005, 2009 and 2013, Jenny’s work on behalf of our community has consistently been recognized by East Vancouver voters.

Her tireless efforts were recognized once again in 2015, when Van East residents voted overwhelmingly to send her to Ottawa, to continue the fight for a Canada where no one is left behind. She currently serves as the NDP’s Critic for Immigration, Refugees, Citizenship and Housing, as well as Deputy Critic for Health.

From the community to the BC Legislature to the House of Commons, Jenny has made a difference in the lives of people in Vancouver East. Standing on the shoulders of the people before her, she is continuing to build a multicultural society where everyone, no matter who you are and where you come from, has the opportunity to succeed—a Canada where social, economic, and environmental justice will always prevail.