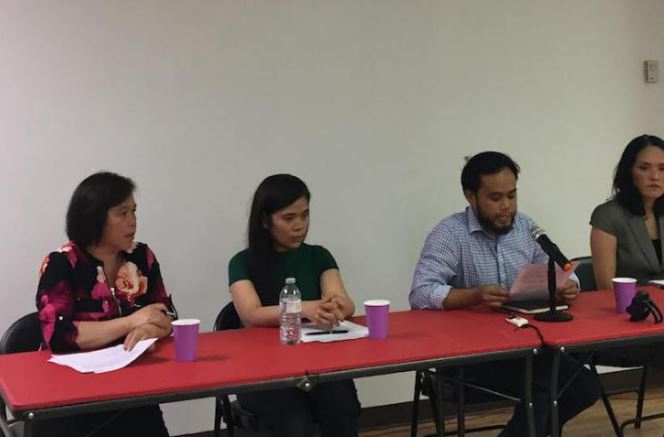 On July 20, NDP Immigration Critic Jenny Kwan organized a press conference in Toronto to decry the backlog of 44,000 permanent residency applications submitted by live-in caregivers that have yet to be processed. Accompanied by caregivers and migrant advocates, Kwan argued that the Liberal government's continued apathy when it comes to the plight of caregivers, many of whom have been separated from their families for years, is "inhumane and indefensible."

Jocelyn, a caregiver who has been waiting for seven years for her permanent residency application to be processed, spoke tearfully during the conference about the hardships of living apart from her family for 13 years.

I came to Canada in April 2008. Prior to this, I lived and worked in Hong Kong for four years. In all the time that I was abroad, I only saw my children three times because airfare is so expensive. My daughter was ten when I left, and now she is 13. She didn't want to go to her graduation because she didn't want to experience the stigma of not having any parents attend. Every year, I keep promising to my kids that they will soon come, but that hasn't been the case. I've been waiting since 2010 for my application to be processed. I've called [Citizenship and Immigration Canada] multiple times and saw my MP seven times. Nothing has happened.

"This backlog is killing families," caregiver advocate Vilma Pagaduan said. Pagaduan observed that if the Liberal government is serious about helping caregivers reunite with their family members, which is a promise different Liberal MPs promised during the 2015 federal election campaign, then they would appoint more personnel to process applications.

Migrante-Canada's Jesson Reyes affirmed that the organization has also been talking to numerous caregivers who have been affected by the backlog. He noted that the Liberal government's reforms to the Temporary Foreign Workers Program, of which the Caregiver Program is a part, were skewed in the interests of employers. "Migrant workers, including caregivers once again were failed by the government," he said.

Kwan ended the press conference by highlighting that the Liberal government should show "political will" in resolving the problems created by these backlogs. "This year, so many resources have been invested towards celebrating Canada's 150th year. I like a good party as much as anyone else but shouldn't we also do something to recognize the needs of marginalized members of the community? It is un-Canadian to keep caregivers away from their families."

Ethel Tungohan is an Assistant Professor of Politics and Social Science at York University and is a migrant advocate.