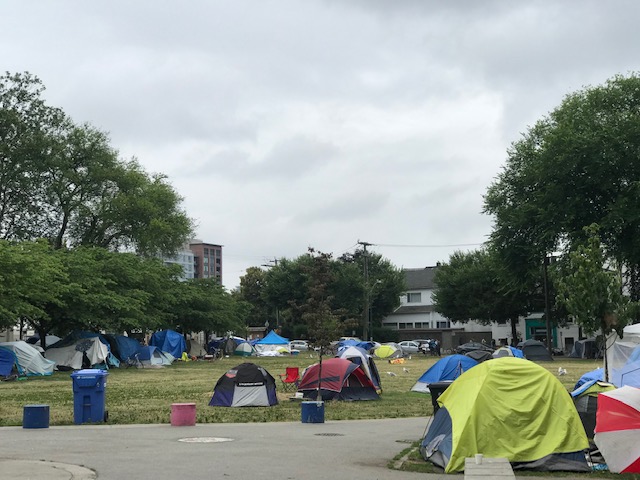 On January 31, 2019 the NDP put forward a Motion calling on the government to create 500,000 units of quality, affordable housing within ten years, and to commit in Budget 2019 to completing 250,000 of those units within five years. I was deeply disappointed that this Motion was voted against by both Liberal and Conservative MPs.

In early June of this year the City of Vancouver released its report on the 2019 Homeless Count. The 2019 City of Vancouver Homeless Count, which took place on March 12 & 13, 2019, is a 24 hour “Point-in-time” snapshot of people who are homeless. It is considered an undercount but provides a basic demographic profile and tracks trends over time.

The total number of people (2,223) counted by the volunteer team was the highest that it has been since the Count was first organized in 2005. Sixty-two percent of the unsheltered individuals counted at that time, in March, were in the Downtown East Side. 39% were Indigenous, and of those who identified as Indigenous, the majority are women. Many youth under 25 were counted as well; 34% of youth are women, 5% are non-binary, 23% identify as LBGTQ2+ (non-heterosexual); 45% are Indigenous; 48% report a mental health issue. When reporting reasons for homelessness, when looking at the structural issues, the report is unequivocal in pointing to the reason: “No housing for very low income [people]”.

On June 18 the Parliamentary Budget Officer (PBO) released a report on the Liberal government’s spending on Housing Affordability. To say it was troubling is a profound understatement. Not only is the PBO uncertain that the Liberals' housing program will actually reduce the housing needs of Canadians, it found that targeted funding for those in core housing need actually went down by some twenty percent.

In Vancouver East, especially in the Downtown Eastside community, many of the residents are in core need. These are also among the most vulnerable populations. In our community we are dealing with a housing crisis right now. They have been for the entirety of this government. As you know, the vast majority of the funding from the housing plan will not flow until well past the next election. I along with my colleagues have called for the government to flow the funds now time and again. The people who are residing in Oppenheimer Park are facing a struggle for their very lives, and their right to live in dignity, and for their right for homes. They cannot wait. There is no question that the need is here and it is now.

I should also note that Indigenous women and girls who have experienced traumatic violence are also in desperate need of safe secure affordable housing. The impact of colonialism is so deep and so rooted in systemic racism and failures that the National Inquiry on Missing and Murdered Indigenous Women and Girls has declared that is genocide. Section 4.6 of the National Inquiry’s Calls For Justice states: “We call upon all governments to immediately commence the construction of new housing and the provision of repairs for existing housing to meet the housing needs of Indigenous women, girls, and 2SLGBTQQIA people. This construction and provision of repairs must ensure that Indigenous women, girls, and 2SLGBTQQIA people have access to housing that is safe, appropriate to geographic and cultural needs, and available wherever they reside, whether in urban, rural, remote, or Indigenous communities.”

The day the Inquiry report was released, I called on the government to commit to implementing all of the Calls to Justice. That commitment has yet to materialize.
Minister, I cannot emphasize strongly enough that urgent action is required. Local governments and the City of Vancouver want to act. Mayor Kennedy Stewart has already put that on the record and has welcomed the federal government to come to the table. The British Columbia provincial government is there, working hard to build housing and to begin to make up for the many years in which successive federal governments have failed to act in proportion to the need for affordable housing that is safe, stable, and secure.

The community is showing their support and understanding for the people who are residing at Oppenheimer Park. The Powell Street Festival, Union Gospel Mission, and the Lotus Light Charity Society have all in recent weeks modified or adapted community event plans originally scheduled to take place in the park at the site where people are residing in order to ensure that their activities would not further displace people. These are long-time community events with deep roots in the neighbourhood.

Housing is not a privilege; having a home is a basic human right that all people are entitled to.
Yet, every day I see the impacts of the inaction on affordable housing in our community. It doesn’t need to be this way, and it shouldn’t be this way. While it has taken far too long to act, we can still make a difference and put ourselves on a course to address the national housing crisis. To start, I ask that you offer a similar deal to the City of Vancouver that your government has provided to Toronto.

It is said that a nation is measured by how well we treat our most vulnerable. Let us start now with the very basics: affordable, safe, secure, stable housing.